ON OUR 12TH YEAR COMMEMORATION (By Mary Ann Burgos) 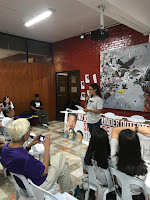 Three days after my daughter was discharged from a 5-day stay in the hospital, we got the news about the delisting. 625 names, one name of which is my husband’s, Jonas Joseph Burgos.

A solo-parent for 12 years since Jonas’ abduction, day to day living has not been easy for my daughter and myself. And to hear that the government has petitioned the UN-WGEID to delist the 625 names! This is like scraping an open wound right to the bone.

Undersecretary Severo Catura of the Presidential Human Rights Committee never consulted any victim or any of their families nor did he get his information from the CHR.

Catura’s premises for the delisting are all false.

1. Legal reliefs for ED cases such as the Writs of Habeas Corpus and Amparo, do not work. In the case of Jonas, we were granted the Writs. We won the case but Jonas remains missing. The AFP did not comply with the order of the Supreme Court. Plus, Baliaga was acquitted.

2. Compensation or reparation of ED cases is, practically, nil--- ask the families of ED cases now present here. My daughter and I have not received any reparation for the very reason that the AFP continuously deny the fact that my husband is a victim of their abduction despite of the Supreme Court’s ruling that it is, indeed, a case of Enforced Disappearance. Apparently, Catura, his committee, and all others who share his opinion on this issue, have not an inkling of an idea of what the victims of enforced and involuntary disappearance as well as their families are going through and, therefore, should never be given the right to speak for any of us.

They have gone through tremendous lengths of effort in conspiring and covering up every bit of truth of their crime against us and many others like us. This move to delist the 625 cases proves how insincere they are in upholding human rights. They intend to officially/legally disappear completely the victims along with all of us, their families. This is their concept of “closure”.

I have but this to say…so long as we, the families of the desaparecidos, have our breaths, no one can stop us in our fight to surface our disappeared loved ones, for only when they are surfaced, when the whole truth is revealed to the public and the victims and their families given justice and the guilty punished, will there be closure. But even then, no one may have any right to delist anyone’s case. The record of these crimes against the people in the past must always be a constant reminder for all so as never to repeat the same mistakes again. 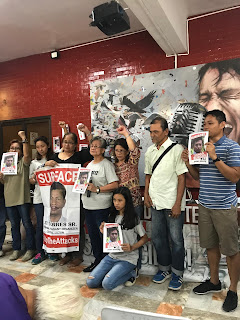 Posted by PinoyXPress at 2:07 AM No comments: